With the promise of supporting more than 15,000 Pa. jobs – including many for highly trained union members – Sunoco Logistics’ Mariner East II pipeline received regulatory approval this week, allowing construction to move forward on the critical energy infrastructure project. The $2.5 billion investment links shale development in Western Pa. to Delaware Co.’s Marcus Hook Industrial Complex, and to overseas markets through exports from the terminal there. Its approval was hailed as a “game-changer” for jobs and economic growth by business, labor, and a bipartisan group of elected officials. 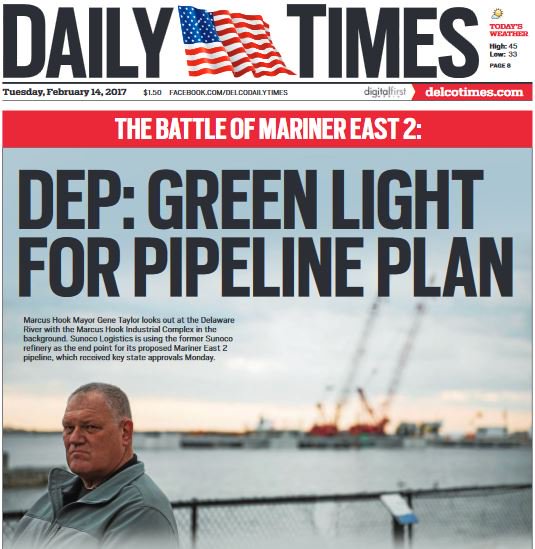 As the Observer-Reporter noted in an editorial, this “investment promises to provide a huge boost to the economy of our area.” Philadelphia-based Econsult Solutions wrote in a 2015 economic study of the project that “the Mariner East project will significantly impact the state’s economy, from the jobs it will create and support, both temporary and permanent, to the tax revenues generated for the Commonwealth.”

What’s more, this energy infrastructure project will be built with U.S. manufactured and coated steel, including from Pa.-based Durabond, a company that recently announced plans to re-open a McKeesport steel facility to meet energy industry demand.

In addition to Mariner East II, another critical project, the PennEast pipeline gained a key state environmental approval, as well.

According to a Concentric economic study, PennEast is projected to support more than 12,000 family sustaining jobs and have a $1.6 billion economic impact during construction of the line delivering Pennsylvania natural gas to New Jersey.

Touting the benefits of energy infrastructure expansion in the Tribune-Review, MSC’s Dave Spigelmyer called these projects “welcome, positive steps” in “connecting more consumers and manufacturers to our abundant and affordable natural gas supplies.”

As these key projects gain approval and move forward, it’s an important reminder that Pennsylvanians strongly support expanded energy infrastructure development. According to a National Association of Manufacturers poll released late last year, energy infrastructure projects enjoy broad bipartisan support throughout the Commonwealth as Pa. voters view the development as a way to boost jobs and the economy.

Watch this video to learn more on how natural gas is ‘Moving America Forward.’