Shale development continues to benefit the entire Commonwealth – our economy, workers, small businesses, consumers, air quality, as well as our region’s manufacturing base. It’s also increasingly clear that these benefits are reaching each and every county, including southeastern Pennsylvania.

In the summer of 2012, an IHS study found that “the phenomenal growth of shale oil and gas plays in the U.S. makes possible several reuse options that otherwise wouldn’t exist for the Sunoco Marcus Hook Industrial Complex, a former oil refinery located south of Philadelphia on the banks of the Delaware River that was shutdown in December 2011.”

When that study was released, an IHS expert offered this observation: “Without these plays, the options available to Marcus Hook would be more limited, and if pursued, could potentially provide an economic ‘second life’ to the complex, which has been a part of the Delaware County community since 1902.” At the time, Philadelphia’s local CBS affiliate reported this: “Delco Officials Think Sunoco Refinery’s Future Is In Marcellus Shale.”

Those predictions – enabled to safe and responsible shale development – are becoming a reality for the Greater Philadelphia economy and working families across the region. And today, MSC member Sunoco Logistics Partners announced a successful open season for its “Mariner East 2 project, the second phase of the Company’s broader plan to provide critical pipeline transportation from the Marcellus and Utica Shales.” 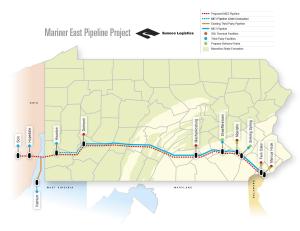 Support these job-creating benefits – and the countless others – tied to tightly-regulated American shale development? Please visit unitedshaleadvocates.com and make your voice heard!