The one-sided story purposefully ignores critical facts and is nothing more than propaganda for fringe activists opposed to safe American energy development.

It should be noted Rolling Stone’s owner recently received a $225 million investment from Saudi Arabia. It should also be noted that Saudi Arabia and OPEC aren’t exactly pleased that America has emerged as the world’s top oil and natural gas producer.

Despite being provided (see below) with scientific data and published reports from independent experts at the nation’s top universities and regulatory agencies, Rolling Stone continues to peddle one-sided fear tactics.

And readers aren’t buying it — literally. As one columnist put it, “the infamously left-leaning magazine” has lost its “reputation” and “journalistic credibility.” Given those facts, Rolling Stone “is a shell of its former self,” according to another commentator. 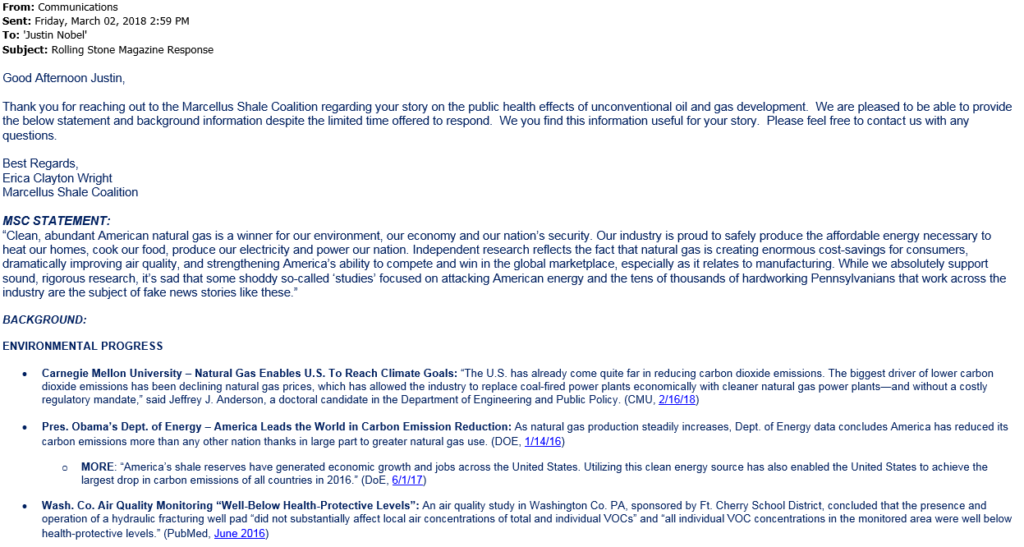 Consider the article’s primary “source” – Physicians for Social Responsibility, a Park Foundation-funded anti-oil and gas group. This fringe organization supports banning energy development and hydraulic fracturing, which would harm hundreds of thousands of Pennsylvania workers. PSR is also funded by the Heinz Endowments – an anti-energy foundation that funnels millions of dollars to “drilling foes,” according to the Associated Press.

Why wouldn’t Rolling Stone provide its readers with these important facts?

And why did the blogger ignore actual air quality data? Any number of public, published and widely reported studies show that natural gas development does not impact air quality.

It’s not just air quality results that Rolling Stone omits from this story, further demonstrating its inability to maintain basic levels of “journalistic credibility.” The story claims chemical additives used in fracturing fluids are “secret” – a false assertion as the natural gas industry in Pennsylvania is required to disclose these fluids on a well-by-well basis to FracFocus. What’s more, MSC members were an early supporter of enhanced transparency and disclosure.

So what do regulators have to say about shale development? According to the Pa. Department of Environmental Protection, “there is no evidence that hydraulic fracturing has resulted in a direct impact to water supply in Pennsylvania.” And the State Review of Oil and Natural Gas Regulations, a nonprofit environmental review organization, has given high marks to Pennsylvania’s strong and rigorous environmental oversight.

Rather than objectively reporting the facts (which were provided to the blogger), Rolling Stone delivers another weakly sourced attack on American energy workers. Perhaps Rolling Stone should stick to music.