The Pittsburgh Post-Gazette and the Philadelphia Inquirer failed to exercise good news judgment by omitting publicly available and easily accessible data for a weekend story. Their piece excludes basic facts and highly critical background in an effort to advance a one-sided narrative.

Since they forgot to do their job, we will help them. Let’s start with providing a little background.

The papers’ “investigation” relies on information pitched to them from special interest groups that have little-to-no experience in natural gas development, yet spend heavily on advocacy-related efforts to advance policies that threaten Pennsylvania jobs and harm our industry.

The fact is energy development is heavily regulated, and we take our responsibility to transparently engage in the policymaking process very seriously. With so many good-paying Pennsylvania jobs and local businesses supported by our industry, it’s critical to ensure that key stakeholders have fact-based information.

We often partner with government in an effort to advance the economic and job opportunities tied to natural gas development in the Commonwealth. We unapologetically work hard and collaboratively to ensure the Commonwealth remains competitive while helping to safeguard the responsible development of natural gas and upholding the highest environmental and safety standards.

While it is our preference to keep the politics to a minimum, we do recognize that is not always possible. And, when the lines between special interest politics and media become blurred, we are left with no choice but to detail the facts.

Unfortunately for readers, the reporters decided to ignore the actions, spending and activity of special interest groups, whose real motive is to tie unrelated policy matters together in a manner with which they financially benefit while advancing a specific political agenda. As a result, Pennsylvanians are held hostage to pointless political strife and budget stalemates, and elected officials are distracted by the politics played by these special interest groups.

But, as they say, why let the facts get in the way of an otherwise great story?

The reporters relied heavily on information from Rep. Greg Vitali, an “outspoken environmental advocate,” as the Inquirer reported earlier this year, who’s a harsh critic of the tens-of-thousands of hard-working men and women across Pa.’s natural gas industry. For example, Vitali, hardly an independent, unbiased source, has introduced legislation to ban the safe use of hydraulic fracturing and continues to advance policies that will damage Pennsylvania energy production, jobs, and, ultimately, consumers.

Here’s a quick look at several key elements of the story where the reporters objectively came up short in providing basic and objective facts and context to their readers:

In the story, there’s a general lack of context around Pennsylvania’s natural gas impact tax – called the impact fee. While the reporters do mention that the impact fee raised “more than the severance taxes in Arkansas, West Virginia, Colorado and Ohio combined,” they fail to acknowledge that the impact fee is a tax, and it has generated more than $1.2 billion for the Commonwealth since 2011.

While the reporters claim former Gov. Tom Corbett’s no-tax pledge is why Pennsylvania’s natural gas tax is called a “fee,” the fact remains the impact fee is a tax. The tax revenues from the impact fee are distributed broadly across all 67 Pennsylvania counties for these communities to use for local improvement projects – not to the state’s General Fund to bankroll the causes of these special interest groups.

The reality is that many special interest groups are furious over the fact that the funds generated by the impact fee (tax) do not pass through the General Fund for their use.

The article exclusively “investigates” spending by energy-related industry groups and companies, but ignores the “lavish” – to borrow the papers’ term – campaign contributions and lobbying activity of government unions, for example.

These groups – which have aggressively lobbied and campaigned for massive energy tax increases mainly through the CLEAR Coalition – have spent more than twice as much compared to natural gas industry, according to state data.

So why didn’t the reporters – who had this publicly available information – care to share it with their readers? We’re wondering the same thing.

Here’s one of the many data points reflecting the massive lobbying influence by public sector unions: 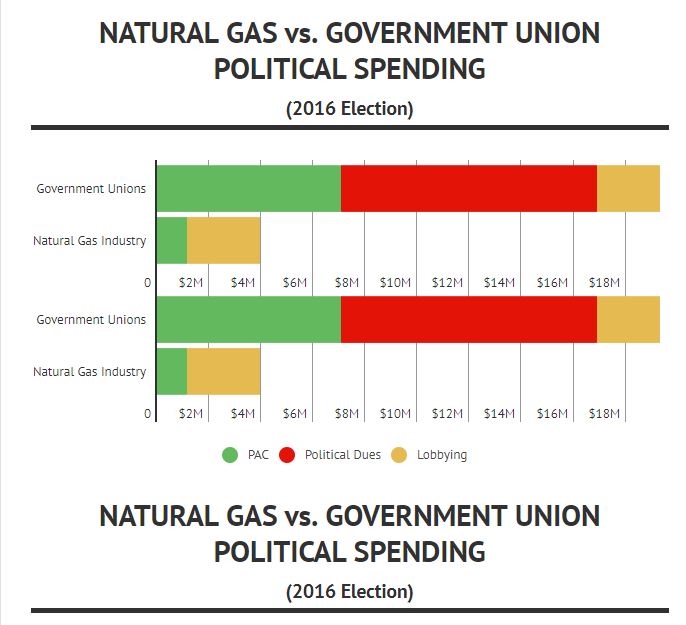 In fact, ramming through higher energy taxes has been and continues to be a top priority for these public sector organizations that include the SEIU, AFSCME, PSEA, UFCW, and AFT of Pa., among others. These groups continue to falsely claim that revenues from higher energy taxes would benefit classroom teachers, when the reality is it would be directed to the state’s pension deficit.

The reporters also forgot to mention that in addition to the lobbying efforts, public sector unions have invested millions in campaign contributions through their PACs and member dues to advance their efforts. Through their special interest organization – the CLEAR Coalition – they have falsely advanced a narrative that is often times untrue and inaccurate.

So who exactly is the CLEAR Coalition?

And why not – at minimum – inform readers of the lobbying and digital advocacy efforts (see below) undertaken by the CLEAR Coalition?

ABC 27: “She was speaking as part of the pro-[public sector] union CLEAR Coalition rally calling for an extraction tax on Marcellus Shale drillers. The group insists that had there been an extraction tax since 2009, state coffers would be $2 billion richer. That’s a significant number since the state’s facing a $2 billion deficit and still looking for ways to fund the $32 billion, 2017-18 budget it passed just last week. They say the answers easy and wonder why the legislature continues to pass on gas.” 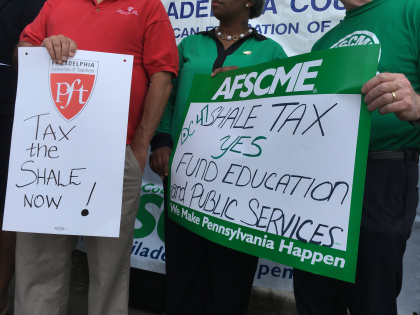 Pottstown Mercury: “Standing on the steps of the Montgomery County Courthouse Thursday, three area Democratic state lawmakers joined members of the Clear Coalition to demand a 5-percent extraction tax on natural gas be included in the 2017-18 state budget.”

CBS Radio Philadelphia: “Local politicians, labor leaders and community activists are calling on the House to return from recess and pass a tax on natural gas extracted from the Marcellus Shale formation. As Philadelphia Federation of Teachers President Jerry Jordan points out, the Commonwealth isn’t the only state that’s drilling for gas, but it is the only state in the nation that does not place an extraction tax on corporations.” 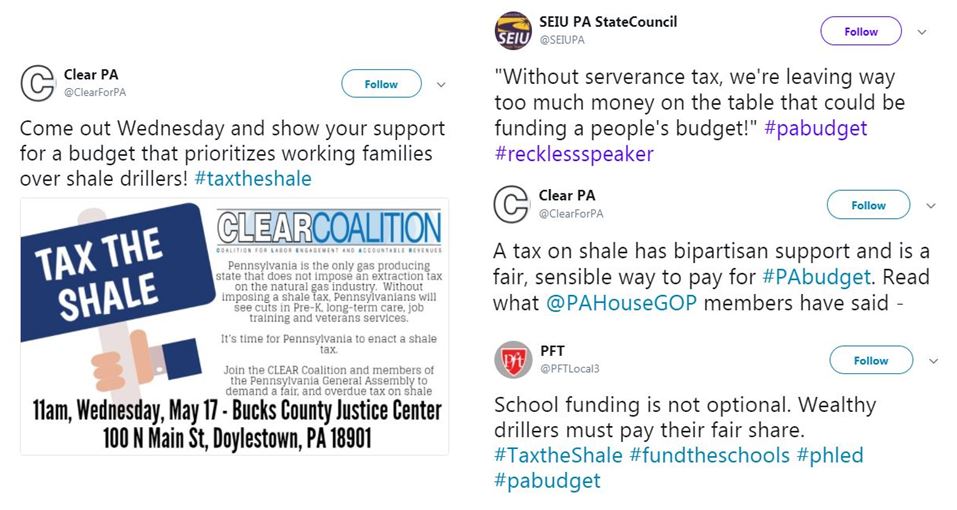 In an effort to remain “unbiased,” the paper prepared its “own” research of campaign finance reports and data, labeling nearly half of the spending as “other companies.”

Once again, in a careless (or perhaps well-crafted) effort to advance a biased narrative, the reporters call out three companies under the headline “drillers” who either are not, in fact drillers, or are no longer doing business in this basin.  For example, Dominion is a midstream and power generation company; Alpha, was principally a coal producer that has gone through bankruptcy and Anadarko announced the sale of its Pa. assets last Dec. 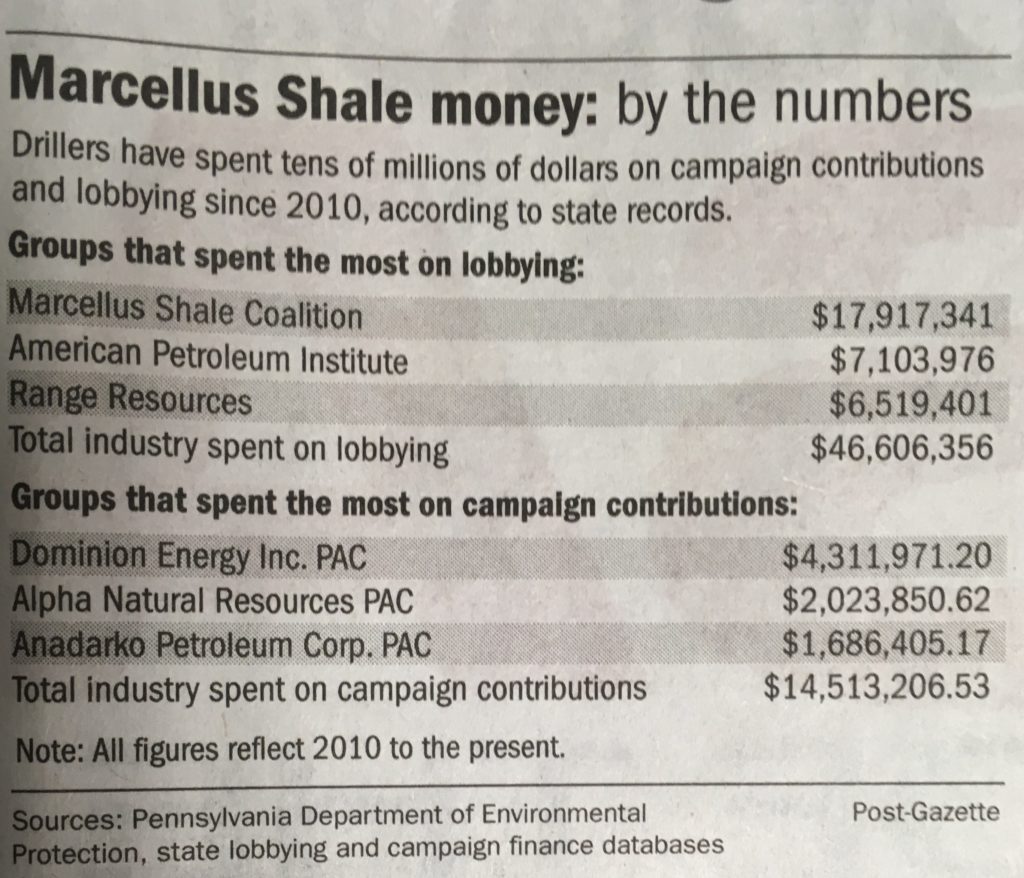 It’s CLEAR (no pun intended) that the reporters set out with a pre-determined headline and selectively cherry-picked data to support their agenda.

They ignored the tens-of-millions of dollars in spending by organizations that aggressively lobby for higher energy taxes and inflated industry campaign contributions all to support a one-sided narrative.

To shed further light on the reporters’ bias, they even write that Gasland “turned a critical eye on hydraulic fracturing.”

Is that right? Because John Hanger, the founder of PennFuture – a leading statewide environmental group – who served as DEP secretary under Gov. Rendell and as a top policy advisor to Gov. Wolf, said the propaganda film is “fundamentally dishonest” and “a deliberately false presentation for dramatic effect.”

One could say that these reporters turned a critical eye on the “real” lobbying landscape and perhaps took the bait from special interest groups hoping to replenish their coffers through the state budget.