American natural gas development is spurring investment and job growth across the chemical manufacturing sector, representing a “stunning reversal of fortune from just a few years ago,” according to new American Chemistry Council (ACC) analysis. In the update to ACC’s 2013 study, the new research makes clear that U.S. chemical industry investment linked to affordable natural gas from shale has reached $164 billion and can support hundreds of thousands of good-paying American jobs.

In fact, this report – among many – further confirms what President Obama stated in 2014: “Our 100-year supply of natural gas is a big factor in drawing jobs back to our shores. Many are in manufacturing – the quintessential middle-class job.” 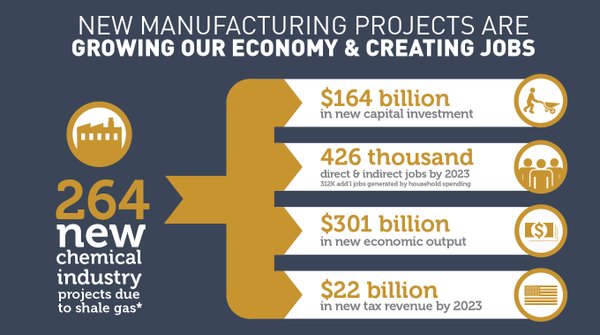 ACC’s report comes on the heels of the first export of ethane – a natural gas byproduct and key feedstock in the chemical manufacturing process – from Delaware Co.’s Marcus Hook processing facility, reflecting the fact that shale is a boon to both domestic manufacturers and America’s allies abroad.

With policies that encourage greater natural gas production and use, Pennsylvania is well-positioned to continue to benefit from shale’s opportunities.