According to the Harvard experts’ analysis, in 2014 American energy development contributed $430 billion to U.S. GDP; supported 2.7 million jobs; saved of the average household $800 through lower energy costs; and improved our geopolitical positioning by reducing America’s trade deficit all while improving energy security. 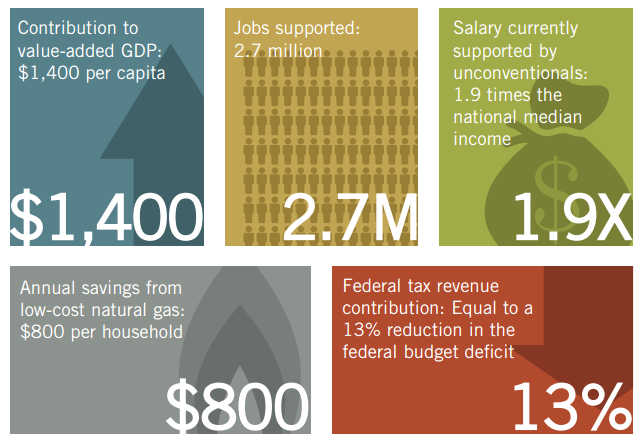 Unconventional gas and oil resources are perhaps the single largest opportunity to improve the trajectory of the U.S. economy.

America’s new energy abundance can not only help restore U.S. competitiveness but can also create geopolitical advantages for America.

America’s abundant and low-cost unconventional gas and oil resources are a once-in-a-generation opportunity to change the nation’s economic and energy trajectory.

With proper policies and actions by the industry and other stakeholders, this economic opportunity can further spread into downstream industries, such as petrochemicals and energy-intensive industries, and more broadly throughout the economy.

And here are the report’s key findings:

And here’s what else they’re saying about shale’s “game changing” benefits: