Pa. Families to Shoulder Costs of Even Higher Energy Taxes 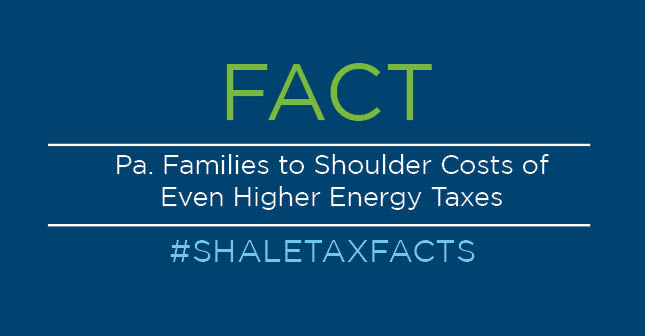 Pennsylvanians are paying less at the pump and realizing significant consumer savings – from home heating to electricity bills – thanks to the responsible development of our abundant shale resources. What’s more, “the United States is now the world’s largest combined producer of oil and natural gas,” as the Associated Press reports, thanks in large part to Pennsylvania’s growing industry.

While nearly a quarter of a million Pennsylvania jobs are supported by or tied to natural gas, Greater Philadelphia – with its talented workforce, coastal access, and infrastructure – has a unique opportunity to capitalize on abundant energy supplies, particularly in relation to manufacturing and chemical production, both of which are an integral part of the region’s economy. These benefits are already taking hold at Marcus Hook, for example, where well-paying union jobs – which were once in jeopardy – have been saved.

Pennsylvania’s leaders must focus on commonsense policies that aim to expand the economic and environmental benefits of natural gas, rather than adding higher energy taxes that threaten jobs and the region’s manufacturing potential – and of course the important energy savings that are helping families enjoy and make possible a summer getaway.

“Despite previous efforts otherwise, Gov. Wolf finally acknowledges that additional energy taxes will indeed be paid by Pa. consumers – including families, those on fixed incomes, small businesses and manufacturers – in the form of higher electricity and home-heating bills,” the [MSC] said. “In fact, to the governor’s point, 100 percent of Pennsylvanians using natural gas – for home heating, electricity, residential use as well as regional manufacturers – will see a cost increase as a result of higher energy taxes.”

“We have found that our member companies have benefited from the growth of a Pennsylvania industry that has delivered significant energy savings,” [Pa. Chamber’s Gene] Barr said. However, that beneficial economic climate might change in the likely event that the costs of the new tax are passed on to consumers, both individual and corporate alike. Pa.’s Independent Fiscal Office said the governor’s energy tax increase proposal “would be passed onto consumers in the form of higher electricity and heating bills.”

Pennsylvania needs solutions that encourage job creation, consumer savings and opportunities to expand our manufacturing potential. Become a United Shale Advocate today and join the thousands of other Pennsylvanians who support new jobs, not even higher energy taxes. And be sure to engage in the online debate to ensure your voice is heard: #ShaleTaxFacts & #SayNoToSeverance.