As some in Harrisburg work to drastically increase Pennsylvania’s energy taxes – a move that will risk shale’s broad-based positive benefits and strong record of job growth – it is becoming abundantly and increasingly more clear that their math just doesn’t add up. Singling out one subset of an industry – which already generates billions in state tax revenue in addition to the projected $830 million in impact tax revenue alone – with even higher and more onerous energy taxes will undercut Pennsylvania’s ability to compete, grow and further capitalize on the opportunities shale provides, especially as it relates to jobs.

As the MSC’s David Spigelmyer has underscored: “Higher energy taxes on an industry that already generates substantial tax revenue for state and local governments would undercut Pennsylvania’s positioning in the global fight to attract capital investments and stunt this economic momentum rather than fully capitalize on it.”

Against that background, consider these facts:

While facts and clear-eyed analysis continue to emerge (much more below), one thing is absolutely crystal clear: Higher energy taxes will further discourage capital investment into the Commonwealth and make Pennsylvania less competitive. That means fewer jobs and a stifling of growth that will hit local small business owners, our region’s union building trades and local communities who rely on impact tax revenues the hardest. And as the Pittsburgh Business Times reports this week, in a story focused on energy companies already slowing spending due to the current global market dynamics: “Less spending means less drilling. So it’s not necessarily a surprise that the number of rigs running in Pennsylvania have dropped to their lowest number since summer of 2009.” 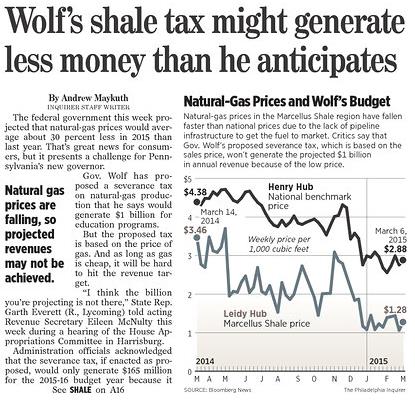 Take action today to stand with working families, local communities and small businesses across Pennsylvania in our efforts to protect jobs and economic opportunity for generations to come.