The overwhelmingly clear and undeniable benefits of safe, responsible American natural gas development from shale formations – such as the Marcellus Shale, potentially the second largest natural gas field in the entire world – are highlighted in two must read national news stories today.

This from the USA Today under the headline “Domestic energy supplies boost U.S. economy”:

The economic benefits of far-reaching new finds of domestic oil and natural gas are fast approaching $1 billion a day and may be keeping the U.S. out of another recession, according to a new study by Bank of America Merrill Lynch.

The biggest part of the benefit is lower utility costs because natural gas is so much cheaper in the U.S. than the world average. That has saved U.S. companies and consumers an average of $566 million a day for the last year, chief of commodities research Francisco Blanch said.

Economists have assumed the new energy finds are helping the economy, but there has not been an easy measure to quantify how much new supplies of gas and oil from shale rock are adding to output. The gross benefits work out to 2.2% of gross domestic product, Blanch said. Since Merrill projects the economy will slow to a 1% growth pace in the second half from 1.9% in the first quarter, cheap energy is increasingly essential, he added.

The biggest reason is that new natural gas finds in 20 states have pushed the U.S. price of gas to just more than a fourth of the average global price and about one-sixth of the price paid by trading partners such as Japan.

Pilot Flying J, a big coast-to-coast chain of truck stops, is installing natural-gas pumps at 150 of its 450 fueling stations over the next two years. Now a trucker can easily carry goods across the continent in a natgas-fueled vehicle.

These steps are just snapshots of a larger revolution that is gripping the energy industry and may profoundly impact consumers and business — for the better.

After decades of rising prices, hostile foreign suppliers and warnings that Americans will have to bicycle to work, the world faces the possibility of vast amounts of cheap, plentiful fuel. And the source for much of this new supply? The U.S.

“If this is true, this could be another dominant American century,” said Brian Wesbury, chief economist at First Trust Advisors, money managers in Wheaton, Ill.

“This is credible,” said Mike Montgomery, chief U.S. economist at IHS Global Insight. He says that if the U.S. reaches self-sufficiency, its vast stores of natural gas will make the difference.

Natgas prices have plunged 83% since their December 2005 peak, which is why truckers are switching over their fleets. Natgas now costs far less than diesel, truckers’ longtime fuel of choice.

Maybe the U.S. won’t be the next Saudi Arabia. But economists say it could shift from energy importer to major exporter.

“Evidence is mounting that a technology revolution in the energy industry is rapidly increasing the supply of available energy commodities, especially natural gas and oil embedded in shale,” veteran market strategist and economist Ed Yardeni said in a research note.

“The consequences of more abundant and cheaper energy are likely to be just as beneficial to global economic growth, if not more so, than the consequences of the High-Tech Revolution,” he wrote. “That’s because energy costs impact the standard of living of everyone on our planet.” 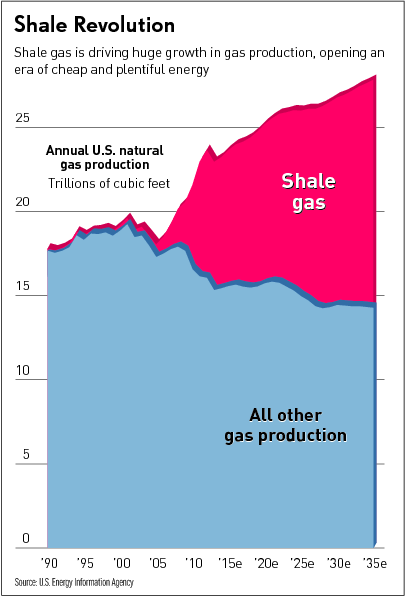 One of the industries that made use of the information processing boon was energy. New technologies were developed to help geologists discover new reserves, Yardeni notes.

Citigroup predicts the U.S. will be not just self-sufficient but also a huge exporter of oil and gas by 2020. The bank projects that the surge in domestic oil and gas supply will add 2% to 3% in real GDP, create 2.7 million to 3.6 million new jobs and cut the current account deficit by 2.4% of GDP.

High on the winner list would be energy-intensive manufacturing, which has taken a thrashing the past few decades. “It could open the floodgates of investment in the U.S.,” Wesbury said.

Wesbury points out that low prices alone won’t drive investment. Stability of U.S.-sourced oil and gas will be just as important.

If investors feel some confidence that energy prices and supply won’t squeeze them a few years down the road, they’ll take a friendlier look at U.S. projects.

Wesbury is optimistic about the cash freed up by cheap energy. The savings would be a boon for consumers and businesses alike.

IHS’ Montgomery agrees that lower fuel costs would be a plus. But he says the top benefit would be sending fewer dollars abroad to satisfy our energy needs.

“The (marginal increase in the) barrels of oil that we produce will reduce imports,” Montgomery said. “That’s good because GDP is output, and more oil output is more output.” “It also sends fewer dollars overseas, which means less bleeding of the trade balance,” he said.