Canonsburg, Pa. – One week ago, the U.S. Geological Survey (USGS) issued an updated Marcellus Shale resource assessment, indicating that the “region contains some 84 trillion cubic feet of undiscovered, recoverable natural gas, far more than thought nearly a decade ago,” as reported by the Associated Press. As noted by the AP, the updated USGS “figure is much higher than the last government assessment in 2002, which suggested about 2 trillion cubic feet of recoverable gas.” 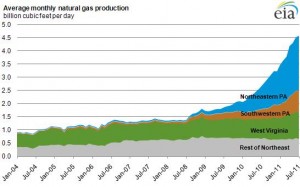 Over the course of the past week, while several flawed media reports surfaced regarding the new USGS data, straightforward facts ultimately prevailed. Below are several of these claims and corresponding facts. Most importantly, the latest production estimates remind us that, more than ever before, the dialogue about the Marcellus Shale continues to be rightfully focused on the region’s leading role in providing clean-burning, job-creating American energy for our nation.

FACTS: USGS notes that “it’s important to do an apples-to-apples comparison here” – something Bloomberg News and the New York Times fundamentally failed to do. “Hold off on those shale gas obituaries,” accurately reports the Washington Post’s Brad Plumer.