A ‘Commitment to the Community’: “Marcellus Shale Players Make Promise To Pennsylvanians”

Canonsburg, Pa. – The economic, energy security and environmental benefits associated with the responsible development of the Marcellus Shale’s clean-burning, abundant natural gas reserves represents a historic opportunity for the region and for the nation. And it’s an opportunity that must be done right.

To further reinforce the industry’s promise the region, the communities where we operate and to our local workforce, Gov. Tom Ridge – a Marcellus Shale Coalition (MSC) strategic advisor – joined the MSC’s leadership last week in formally unveiling the organization’s “Guiding Principles.”

“As a coalition it’s our responsibility to develop this resource the right way. Our core values include the safety of our employees, our landowners and the communities where we work, environmental stewardship, transparency, and a commitment to best practices. Most importantly, while this is complex technology, we need to keep things simple – we must, and are committed to doing things right,” said MSC chairman and Range Resources senior vice-president, Ray N. Walker, Jr.

MSC president and executive director Kathryn Klaber adds, “The MSC’s ‘Commitment to the Community’ underscores the industry’s steadfastness to ensuring that this generational opportunity ‘is done right,’ so that the nearly 12 million Pennsylvanians, and beyond, realize its overwhelmingly benefits.” 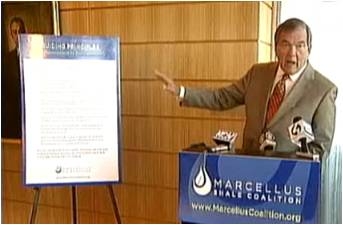 And in a Sunday Pittsburgh Post-Gazette column, Gov. Ridge underscores the industry’s long-term commitment to the community, writing this about the MSC’s guiding principles:

We will protect our environment while creating tens of thousands of family-sustaining jobs. We will continue to work to strengthen local communities and see to their needs while we create sustainable, long-term economic- and energy-security benefits for every Pennsylvanian. We will focus on developing new demand for natural gas while we improve our efforts to conserve energy.

These principles guide our work. They are the core of our mutual mission to responsibly realize the promise of the Marcellus Shale on behalf of 12 million Pennsylvanians as we transform the commonwealth into a vibrant hub of clean-energy development and job creation.

Our ‘Commitment to the Community’ in Action