New site serves as interactive, one-stop-shop for shale gas job-seekers in the region

Canonsburg, Pa. – Today, the Marcellus Shale Coalition (MSC) launched a cutting-edge, interactive website dedicated to connecting job seekers with its member companies operating throughout the Marcellus region. The site – MarcellusCoalition.org/site/jobportal.html, which is featured below – offers in-depth descriptions of the broad range of jobs available in the industry, as well as current openings and employment opportunities. 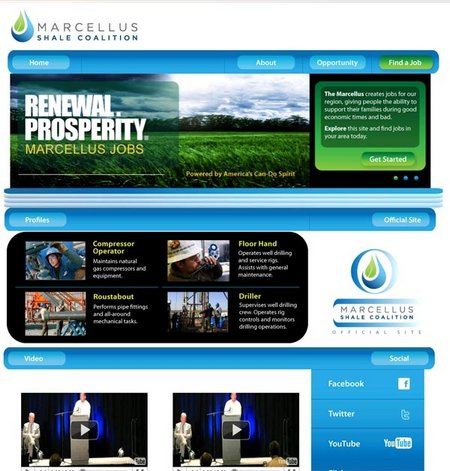 Kathryn Klaber, president and executive director of the MSC, issued the following statement about the industry’s commitment to training and hiring local workers for the thousands of jobs that the shale gas industry is creating throughout the region:

“The responsible development of the Marcellus Shale’s abundant, clean-burning natural gas resources continues to expand throughout the region, helping to fuel a robust and growing supply chain network – the ‘Marcellus Multiplier’ – across the Commonwealth.

“And as this production expands, and the demand for labor and services continues to grow, so too are the tremendous amounts of job opportunities for the region’s workforce. In fact, a recent study conducted by professors from Penn State projects that over the next decade, Marcellus production will create nearly 212,000 new jobs in Pennsylvania alone.

“Our industry is committed to putting Pennsylvanians to work, strengthening our workforce and our economy, and putting our nation on a path toward a cleaner and more secure energy future.”