Marcellus Shale in PA: Re-Writing a Legacy of the Past, and Creating a New One for the Future

Here’s a number that might surprise you: According to the federal Energy Information Administration (EIA), Pennsylvania is home to more than 55,000 active natural gas wells, more than any other state in the nation but one. Broken down another way, 11.6 percent of all gas wells in the United States can be found in the Commonwealth today. In fact, over the past 150 years, DEP estimates that more than 325,000 wells have been drilled across the state.

So if all that’s true, how could it be that Pennsylvania only produces 1.5 percent of the nation’s natural gas?

The answer, actually, is fairly simple: For generations, Pennsylvania has been known as a “low-yield” or “stripper” state when it comes to the production of both natural gas and oil – a function of the technology of the times (or lack thereof), and an intra-state infrastructure considered to be embryonic at best. But at least for natural gas, that reputation is presently undergoing a rapid transformation – one made possible thanks to the extraordinary investment of time, technology and material resources currently being made by producers of clean-burning natural gas from the Marcellus Shale. 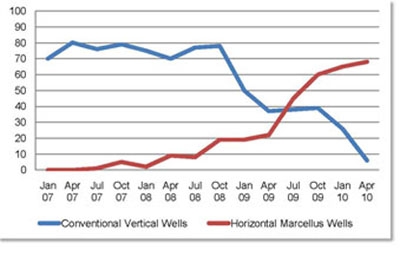 So what exactly is it about the Marcellus that has people throughout the state and across the country checking in every day to see what new discoveries are being made by MSC producers? Why is it that MSC members continue to be invited on Russian television to answer questions like: “Just how serious is this whole shale gas revolution ‘thing’?” and “How might your efforts in Pennsylvania impact our plan to form an OPEC-like organization for gas?”

The answer, again, is simple: In the Marcellus Shale, Pennsylvania has the chance to author a new chapter in this nation’s energy and economic history – one in which a non-fictional account of new jobs, new revenue, greater security and the prospect of a cleaner environment is told and retold to future generations. We also have the opportunity to write an interesting eulogy along with it – this one, recounting the tale of how a mere 1,300 horizontal gas wells drilled by MSC producers almost single-handedly turned aside long-standing attempts by Russia and Iran to develop an international cartel for natural gas.

Of course, the achievement of all these critical objectives in the Marcellus is not exactly a fait accompli. For this vision to be fully realized in the future, a couple of important things will need to be accomplished in the present. For starters, we need a cooperative “work together” attitude fostered among regulators, legislators, environmental groups and industry.

The opportunities that responsible Marcellus exploration continue to make available to the state, its residents and our entire nation are indeed great. Whether we’re able to fully seize on those opportunities is a choice that must be made collectively by all. Rest assured, the entire world will be watching closely what we decide.