The economic climate right now in the nation, especially in small and rural communities across Pennsylvania, remains challenging to say the least – and as volatile and uncertain today as it’s been in decades. For proof of that, look no further than the Commonwealth’s jobless rate, which remains right at the doorstep of double-digits.

But at least here in Pennsylvania, we’re starting to fight back. And the 90+ members of the Marcellus Shale Coalition are the ones right now throwing (and landing) the uppercuts.

In 2009, a study organized by Penn State University found that nearly 50,000 new jobs were created in Pennsylvania that year thanks to the safe, steady and responsible development of the Marcellus Shale. And according to that same study, nearly 107,000 jobs are anticipated to be created in 2010 – along with $8 billion in total economic activity.

Now, is each and every one of those more than 100,000 jobs directly involved in tapping that natural gas? Of course not. But just because these jobs may be considered “indirect” doesn’t mean they’re not important. After all, not only are we talking about the contractors, and the transportation folks, and the manufacturing work, we’re also talking about the local diner owners, and the hotel folks, and the office staff.

And direct or not, elected officials and area media are starting to take notice of this extraordinary economic opportunity:

Williamsport Sun-Gazette: “The industry…is generating robust revenues in the form of employment and ancillary spending. … The opportunity of a generation to our region.” (Editorial, 5/5/10)

So how do we intend to build on that progress in the future? Glad you asked. Here’s a quick snapshot of what our members — about only 20 percent of them, actually — are up to right now when it comes to creating and sustaining good-paying jobs for residents of the Commonwealth: 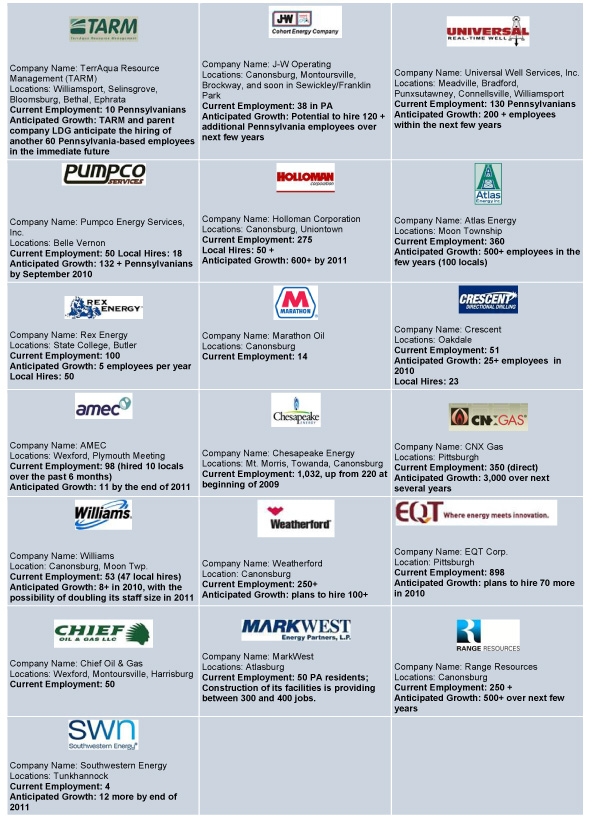